Ragusa Pattern was founded in 1939 when Tony Ragusa was asked by customers to start his own business.  Tony had been showing exemplary skill that brought him a following of clients.  The shop opened in Los Angeles after Tony bought Craftsman machinery from Sears.  Tony’s son Angelo learned patternmaking as an apprentice to his Father, and other extremely accomplished tradesmen at Ragusa Pattern.  Due to constant growth, in 1942  a larger building was constructed.  This allowed the company to expand for Government War projects.  In 1943 Angelo went into the U.S. Air Corp until 1945, while Tony kept the shop thriving.  Angelo was given leave throughout his duties to come home and help his father work on several World War II jobs.  In 1972 the third generation arrived on the scene, Angelo’s son Ron began his career.  Ron took to this interesting work exceptionally well.  It was a true joy for grandfather Tony and father Angelo to mentor young Ron.  In 1978 the loss of leader Tony shook the Pattern Shop to it's core.  His wisdom and personality are still missed by all to this day.  The new millennium brought forth another generation.  With his fresh college education, Chase Angelo began his career in molding the pattern shop into a 21st century corporation.  Ragusa Pattern saw three generations again.  Over the years, beginning with World War II pattern work, to the contemporary products of today, Ragusa Pattern has moved forward with the times.  Today we are located in our largest facility in Orange County, California; where we serve clients from across the globe. 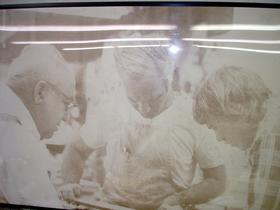 “Patternmaking was a new class for me at fourteen. My father was my teacher and, in an on-going family tradition, he and I taught my Son. Today I'm fortunate enough to watch my Son and Grandson apply classic techniques with future technology."